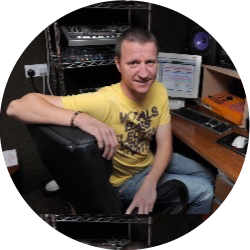 Graham Dominy, who almost could have been a rock star is the man behind the magic at Embassy Studios.

It was back in 1995 when Graham was offered a chance to start his career, working with Eurythmics’ Dave Stewart at Church Studios. Now with 20 years’ experience in the bag when it comes to engineering, Graham has worked with some of the biggest UK and international names.

With several Eurythmics albums under his belt, Graham’s reputation quickly spread which had him working with the likes of Tom Jones, Lionel Richie, to Razorlight and Plan B.

Notably, Graham’s versatility has seen him go from strength to strength working cross-genre to engineer rock and roll, pop hits, R&B and Soul, Reggae and World Music too.

When he’s not in the studio, Graham can also be found engineering at some of the worlds biggest performances, including Elton John’s Peace One Day concert, featuring James Morrison – where he mixed the live broadcast on YouTube to a live audience of 3.5million people.

Now at home at Embassy Studios, Graham has gained his experience working at some of the most well respected and prestigious recording studios across the UK including; Town House, Konk, Livingstone Studios, Church Studios, Sarm Studios, RAK and the world-class Abbey Road Studios.

You can find more information Graham’s extensive catalog of works on Discogs.

We able to help with any aspect of your recording needs. Get in touch

Founded in 2005, Embassy Studios have been home to some of the biggest industry names, over 200 albums and over 5000 tracks.